It rained a lot that night, and it stopped in the early morning.  This is perfect for tracking as it "resets" and softens the ground for new prints to mark easily. Bill and I arrived at 8am to my regular bow-hunting ground.  Driving down a little path in the woods, we parked right in the middle of "Wildlife Territory".  So we stayed in the car for 15 minutes, talking about tracking generalities and how this initiation workshop will progress, as once out of the car we would have to move with stealth and talk quietly and sparingly.  Once the introduction over, Wildlife had settled down a bit, so we slowly got out of the car, calmly shut the doors, and walked further into the woods on a nice little trail.

Not much more than 20 meters ahead we already found plenty of spoors : flattened grass and a lot of prints in the mud.  I let Bill investigate : plantigrade, digitigrade or ungulate ?  Seems like both digitigrade and ungulate have marked the ground... Little by little, with the help of JSLP's Leaflet and a few hints, Bill managed to recognize the Fox's print and the Roe Deer's.  > grade = C

He even managed to tell which way they were going, to age them relatively to one another, and to the night's pouring rain.  Roe Deer (a male) came first during the night, up and down the slope ; while Fox went down-slope not long ago.  We followed the freshest trail (Fox's) which happened to go in the same direction as our-stalking-selves.  Fox followed the path, in the mud, in tall grass and down in the nice large field naturally enclosed by forest.  There, we stopped to study its Soundscape.  > grade = B

Sitting down, we closed our eyes in order to "open" our ears wide.  10 minutes of blind-silence made Birds' presence crystal-clear.  10 more minutes writing on the paper what and where we heard Sounds made us connect with the spoor of the night's Rain, falling from the trees' leaves each time the Wind changed in intensity and direction.  > grade = A !  Bravo, Bill successfully passed his initiation ;-)

When back-tracking ourselves and the Fox, prints we didn't see (but which were already there) popped out !  We saw and analysed a huge Spider's web hanging across a perpendicular path and telling us that no mammal had gone this way... Bill was caught into another spider-web, which might tell to someone else later on that a tall Human passed this way !  When arriving at the car, a very fresh scat stood in the middle of the path.  A lot of cherry pits inside, very shiny, discoloured and liquid scat... Despite his diarrhoea, Fox has been tracking us all along !!!  Nature still has a lot to teach to all of us :-D 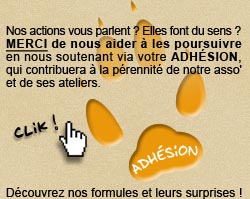